“I was very dissatisfied with my work, and my personal life had taken a major nosedive. By the end of 2020, I was perhaps at the lowest point of my life,” Ian Triplett admitted, standing on the porch of his grow room. At just 64 square feet, the entire operation for Three Cap Farms might be mistaken for a simple shed on his family’s farm.

“Still,” he continued, “the silver lining came when I realized I could pursue my dream of growing mushrooms. That still sounds so weird to say out loud.” 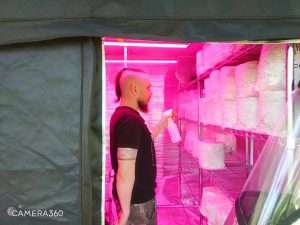 For Triplett, that dream started as a mushroom plug kit that he bought from Wegman’s in 2015. “Mind you, I didn’t like the taste of mushrooms, but I was intrigued. I was first amazed to see how mushrooms grow and then genuinely surprised by the taste. Mushrooms could taste good?”

That experience bred a healthy obsession, including 80-plus hours of YouTube research, and a first, ill-fated business attempt to cultivate mushrooms for high-end restaurants in 2016. But that’s starting the story in the middle.

Triplett and his family moved to Leesburg in the mid-1990s at the start of Loudoun’s farm winery boom. They settled in a farm outside of town and his father grew grapes commercially, including planting Greenstone Vineyard in 1996.

In his teen years, Triplett wasn’t an eager hand on the family farm, acknowledging that video games, girls and partying were a bit more fun. After high school, he served in the Marine Corps for four years before studying economics at Longwood University.

It was banking that would give him the best career opportunities, but it was agriculture that kept calling him home. Even while pursuing a white-collar job, he has worked several roles at Willowcroft Farm Winery in Leesburg.

“Helping in my dad’s vineyard was my first real experience in agriculture. I always wanted to work in agriculture as a full-time gig,” he explained. “Fast forward to 2020: I’d become quite successful in banking, but ultimately I was very dissatisfied with my career. It wasn’t something I enjoyed in any meaningful way, despite working with and for some genuinely amazing people.

“By August I left the industry, came back to the family farm, and started up Three Cap Farms. This time, I’d developed an array of skills to help me start and manage a mushroom business, and a good bit of capital to get it underway.”

Finding Stability In a Fungus Startup

“I knew it was highly risky, success-wise. I’d have to put on hold some other things I wanted. I’d have to spend a lot of my own monies to get the business started. I’d have to survive without a paycheck for an indeterminate amount of time,” he said, listing out his thought process. “Still, there was no hesitation.

“Since starting the business, I’m doing what I love, and I’ve regained a lot of who I was back in the day. It feels great.” 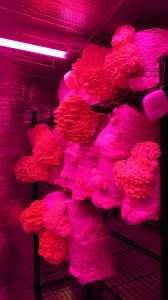 Part of Triplett’s joy has been the study of fungi, also known as mycology, which encompasses more than 10,000 known species of mushrooms. Of those only 2% are considered poisonous to humans, with another 2% that have hallucinogenic or psychedelic effects.

“The challenge that all mushroom cultivators have is mycophilia: the fear of mushrooms. There are people who are afraid that all mushrooms that aren’t button mushrooms are poisonous,” he said. “This is one thing I always have to reiterate to hesitant customers: if they can get over this, then they’ll open up their culinary options since 10,000 is a rather large selection to choose from.

“There’s so much to fungi in general and I’m continually delving deeper into mycology. That’s partly what kept me hoping that one day I could quit my job and just grow mushrooms. Thankfully, that happened a lot sooner than I expected.”

Three Cap Farms sells 15 products on the Loudoun Made Loudoun Grown Marketplace, including four varieties of local mushrooms, sold fresh by the ounce, fresh by the pound, and dried.

Despite growing everything in a “low-tech” 8×8 shed, Triplett harvests more than 60 pounds of mushrooms each week. As he continues to refine his process and expand his customer list in the coming months, he plans to double his footprint and weekly output.

“Mushroom cultivation can be a very scientific and exacting process. It’s kind of like a vegetable hydroponics setup, but I’m in the grow room daily mopping up excess moisture, and spraying down exposed surfaces with a bleach solution to kill off any competing bacteria or fungi. The grow room is just one part of the operation, albeit an important one.

“Each of these spaces is part of a step-by-step process, which requires an exact approach. The more exact the process, the better the mushroom yield.

“The space for all the other parts of the business takes up less than 600 square feet, so it’s entirely viable to have 150 lbs of mushrooms coming from an operation that takes up no more than 900 square feet. That’s the size of a living room in Loudoun County,” he said with a chuckle. “I could spend days detailing all this, but I don’t want to overwhelm anyone.”

Depending on the survey, roughly one-in-three people claim to not like mushrooms. Considering that most varieties are approximately 90% water, two factors are likely driving the distaste: sourcing and cooking.

“People who buy mushrooms solely from the store – button mushrooms, portobello, baby bella, cremini (all variances of the same mushroom genus) – are missing out on a big thing: flavor,” Triplett said. “I equate store-bought mushrooms to being the tofu of mushrooms. Tofu isn’t necessarily a bad thing; it is healthy and can absorb the flavor of other ingredients that it’s cooked with.

“My mushrooms are just much more distinctive in flavor. They can stand on their own stems.”

Triplett strongly encourages his customers and mushroom novices to start their culinary journey by understanding the unique flavors of each variety.

“Take a small bit, 1-2 ounces, and sauté it in a pan with one-half tablespoon of good butter and a pinch of salt,” he said. “This allows the customer to really get a grasp on the distinct flavor of the given mushroom because there really is a distinct flavor.” 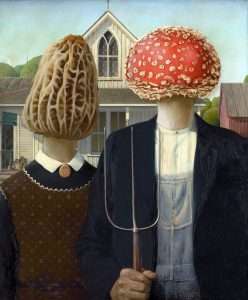 If you’re familiar with “American Gothic,” the iconic 1930 painting by Grant Wood, depicting a farmer standing alongside his daughter (not his wife), the first thing that comes to mind is probably not mushrooms.

Unless your name is Ian; either Triplett or local artist Ian Steffen. Together, the Ians created American Fungic, a celebration of mushrooms in the arts.

“When I started Three Cap Farms, I was also working nights at Wegmans in Leesburg, where I met fellow employee and part-time artist Ian Steffen,” Triplett said. “After looking at his portfolio, I knew I wanted him to do work for Three Cap Farms.

“We brainstormed some ideas, and Ian has done some labels for me, and a service of art that I’ve been calling ‘Object de Champignons’: taking classic, public domain works of art, and mushroom them up a bit.”

In addition to his growing collaboration with Steffen, Triplett is also excited for expanded sales through the Purcellville Farmers Market and other opportunities to sell direct to consumers. He’s also working on developing all-Loudoun beef and mushroom burgers, working with Zephaniah Farm Vineyard to bring those to market.