Do you have a burning question for our own local celebrity  Winslow? Winslow took over the Loudoun Farms Facebook page to field questions about everything from his racing record to the new legislation regarding dogs in breweries and everything in between. 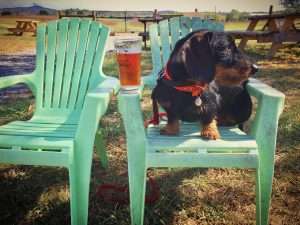 Winslow, a wirehaired Dachshund from Lovettsville, has made quite an impact on the area in the short time he’s been here. He is the unofficial mascot of the county and has been recruited to promote local businesses since he became a brewery model at the age of ten weeks! Weinerdog racer, blood tracker, shrewd businessman, this little guy knows a little bit about everything. So we’ve decided to let our readers learn more about him!